Insulating AC cabinets is similar to machinery spaces with the additional challenge of the need for return air which requires an opening directly into the affected area.  For the sides and top of the cabinet Soundown Vinyl/Foam Composite will absorb and block noise. To reduce noise exiting through the return air vent there are a couple of options.  Where possible ducting return air through an insulated flexible duct that makes one or more 90 degree turns is recommended. Space does not always allow the use of this type of ducting.  In such instances a baffle of Soundown QuietPro should be placed between the AC unit and louver to reduce the emitted noise.  This baffle should be placed in such a manner that it blocks line of sight (any direct path) while allowing sufficient air flow. 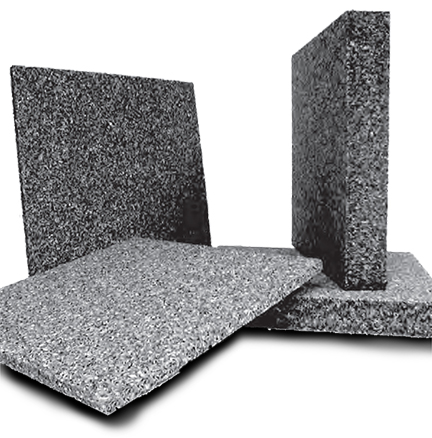 Your second point of serious consideration should be the mounting system under the AC machinery. Most likely, the right solution will be a BRB mount or ring bushing mount, but for best results call us with the weight and specs of the unit, and we’ll tell you the best mounting solutions.

When mounting the AC unit it is important to take into account that units are equipped with drip trays that are intended to catch condensate from the unit.  To install mounts without sacrificing the integrity of the drip pan a section of aluminum angle should be cradle it and extend beyond the ends far enough to install the mounts.  See detail that isn’t here yet.

The next treatment to consider is to focus on the vents channeling the AC. Both return air and output air can lead to noise. One reason is that many naval architects try to keep these vents on the small side, making the velocity of the air much higher. The Bernoulli effect applies to vent systems, meaning that the smaller the diameter of the vent, the faster the air has to move to get through it. Faster air movement can lead to more rattle, more pressure on the system producing structureborne noise, and more particles picked up by the air and causing noise as it bounces and blows around in the vents.

One solution is to consider larger vents – they will reduce bumping and rattling sounds, reducing your airflow noise to a less distracting general gray noise.

For returning air vents, it is wise to install a large louver right in front of the return vent (it will break up the air flow being sucked into the vent). Then position a baffle between the louver and the machinery, absorbing the airflow inconsistencies and reducing the vibrational impact on the rest of the system.